Whether Albert Einstein said this or not, I think it is safe to assume that Energy in its physical sense exists, and is relational to everything around us.

Until very recently, when ‘Energy’ was used in any way apart from its purely physical sense, it was mostly ridiculed. Even today, when we talk of ‘healing energy’, most tend to dismiss it.

I come from a scientific and philosophical background where science definitely takes the central stage but where I believe we, as a society, still have lots to discover. To me, energy lives in harmony with its environment. Why don’t we open our minds to what could be?

I think we can all agree that the mind is a truly powerful entity. Whether used for good or bad, it regulates our emotions and rationale which leads to a healthy state… or not.

Now I won’t go into scientific details for lack of time as well as knowledge, but I will copy a few extracts from other sources.

More on the scientific side:

The scientists discovered that the observed vibrations are connected with the cardiovascular system, which has its own proper movements occurring simultaneously with the work of the heart. Three types of infrasonic vibrations were registered. Waves of the first type are connected with the heartbeat; the second with the human respiratory rhythm; the third, called Traube-Hering waves, with states of emotional tension. Thus, it could be possible to judge the human emotional state via the amplitude frequency response of these waves. Phys.org

And more on the metaphysical side:

Energy is a theme that permeates many areas of complementary health care, including Reiki. For historic and emotional reasons, two key words have not been mentionable in polite academic research society: “energy” and “touch.” Hence it is not surprising that Reiki therapy has been neglected by mainstream biomedical science.

This picture is changing rapidly because of exciting research from around the world. The tale of how concepts of “healing energy” have swung from suspicion and ridicule to respectability is one of the most fascinating and clinically significant stories that can be told. reiki.org

If you allow yourself to see some truth in this, here is a list of oils, with their frequencies. You decide whether you believe interacting frequencies can harmonize our body, but one way or the other, I hope I have opened up your mind to this possibility. 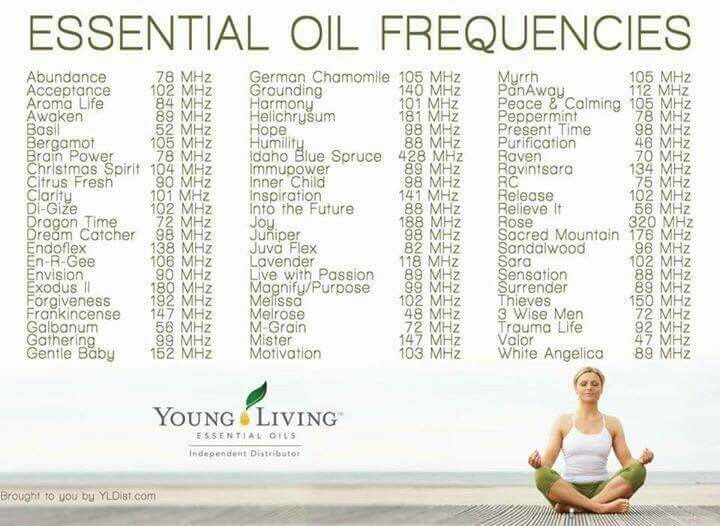